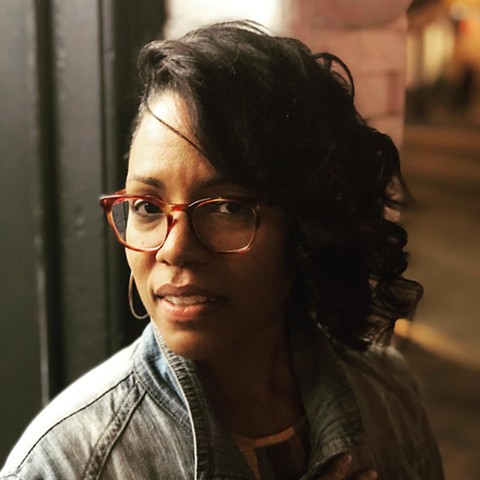 A native Washingtonian, Kristen Hayes-Campbell is a teaching artist residing in Washington, D.C. She holds a Bachelor of Arts degree in Graphic Design from Hampton University and a Master of Arts degree in Painting from Pratt Institute. During her time in New York City, she spent five years as a Graphic Designer for Basic Books and Kensington Publishers, creating book covers for such laureates as June Jordan and Ishmael Reed. In 2012, she was recognized as a “Champion of Change", an honor granted by the White House's Commission on the Arts and Humanities for her work at Savoy Elementary School, entitled "Color Is Life", an initiative developed to aid in student success through the transformational power of color in social and academic spaces. She was granted a summer artist residency in Portobelo, Panama in 2010 with Arturo Lindsay’s Taller Portobello, where she was was provided space and inspiration to develop work that led to a solo exhibition at the Atheneum in Alexandria, Virginia entitled “No Room for Doubt”. In 2016, she was invited to exhibit in a two-person show at P Street Gallery, located in the Georgetown area of Washington, D.C., where her work was featured on the Gallery Guide's May cover and reviewed by the "Washington Post". Additionally, in 2016 Kristen received the honor of sharing her artistic journey during an artist talk with the students of her alma mater in Hampton University's Fine Arts Department. She is presently a fourteen-year visual art educator, working with the lower school community of the Sidwell Friends School in Bethesda, MD. In conjunction with continuing her personal work as a member of DC Arts Studios in Takoma Park, MD, she has more recently conducted mindful painting sessions for others that provide space for self-reflection and the flow of one’s personal healing through the practice of art making.